File:Zeus Yahweh.jpgThis is a coin from fairly late, and shows
how wary we should be about the history of Israel.
The forms of monotheism are treacherous grounds
and the question of its emergence is of something barely
distinct from polytheism and yet the prophetic version
with its YHVH understood this confusion and
strangely created the Tetragrammaton.of the unspeakable ‘god’
The true vision wasn’t the monotheism coming later
or the endless mythology of the Old Testament.
In any case by the period of Ezra it was totally obvious
that some strange transformation had altered Israel/Judah. 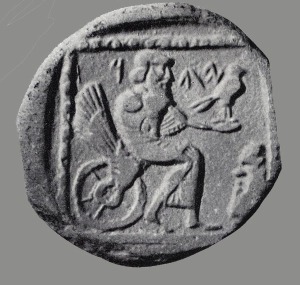 English: An image with better resolution is at File:YHD coins.jpg.

Phoenician drachm, 4th century BC, on exhibit in the British Museum.

The coin shows seated , labelled either “YHW” (Yahu) or “YHD” (Judea), see below.

“A coin from Gaza in Southern Philista, fourth century BC, the period of the Jewish subjection to the last of the Persian kings, has the only known representation of this Hebrew deity. The letters YHW are incised just above the hawk(?) which the god holds in his outstretched left hand, Fig. 23. He wears a himation, leaving the upper part of the body bare, and sits upon a winged wheel. The right arm is wrapped in his garment. At his feet is a mask. Because of the winged chariot and mask it has been suggested that Yaw had been identified with Dionysus on account of a somewhat similar drawing of the Greek deity on a vase where he rides in a chariot drawn by a satyr. The coin was certainly minted under Greek influence, and consequently others have compared Yaw on his winged chariot to Triptolemos of Syria, who is represented on a wagon drawn by two dragons. It is more likely that Yaw of Gaza really represents the Hebrew, Phoenician and Aramaic Sun-god, El, Elohim, whom the monotheistic tendencies of the Hebrews had long since identified with Yaw…Sanchounyathon…based his history upon Yerombalos, a priest of Yeuo, undoubtedly the god Yaw, who is thus proved to have been worshipped at Gebal as early as 1000 BC.” (pp. 43-44)